Prima News Almost EUR 6.5 million from the German Government invested in 2015 in... 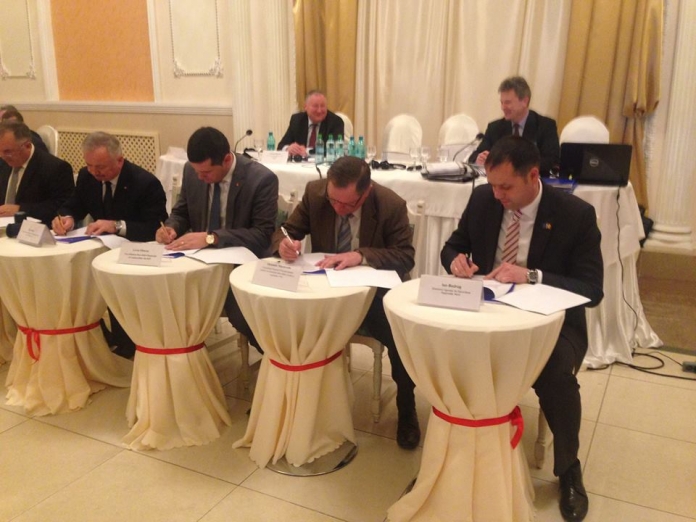 Six Memoranda of Understanding for support in the amount of EUR 6.45 million for regional development projects were signed on 16 December 2014 by the German Development Cooperation through GIZ, Ministry of Regional Development and Construction (MRDC) and rayon councils and municipalities of beneficiary communities. The projects cover the following sectors: water supply and sanitation, solid waste management and energy efficiency of public buildings.

The German support was provided through GIZ project ‘Modernization of local public services in the Republic of Moldova’.

Each Memorandum of Understanding for the projects supported was signed as well by the Regional Development Agency (RDA), which will handle procurement and monitor investments. The EUR 6.45 million will be invested in 2015, in 2014 several public procurements has already started.

‘We appreciate the continued collaboration with GIZ partner during this period, as well as the support of LPA representatives from regions in the implementation of projects funded. I hope that the ongoing dialogue will provide an optimal logical framework for the implementation of pilot projects’, says Liviu Oboroc, Deputy Minister of Regional Development and Construction.

In the water supply and sanitation sector will be supported two pilot projects in Cahul and Râşcani rayons. Thus, there will be constructed the sewage system in Rosu village, Cahul rayon and will be rehabilitated the water treatment station in Cahul town. The inhabitants of Duruitoarea Veche village, Rascani rayon will have access to sewage. It is also planned the reconstruction of wastewater treatment plant in the city of Costesti.

In the field of solid waste management, is to be built an Inter-municipal Center for Solid Waste Management in Parcani village, Soldanesti rayon. It will also be rehabilitated the waste compaction block of Soldanesti town. From these investments will benefit approximately 45,000 people in 23 localities in Soldanesti rayon and 4 in Rezina rayon.

In the energy efficiency of public buildings sector, investments will be made to optimize energy consumption in two rayon hospitals in Orhei and Nisporeni, such as insulation works, installation of thermal units. In these institutions will be implemented an intelligent energy management system and the staff will be trained accordingly.

In addition to infrastructure investments, the German support comes to contribute in adjusting local plans and programmes on respective sectors, intensify cooperation of localities for joint provision of services, capacity development of service operators and public information and awareness.

The Memoranda Signing took place at the annual meeting MRDC-GIZ, where the preliminary results for 2014 were presented, so as the planned activities for 2015. You can filnd below the availabe presentation in English from the annual event:

Regional Development and RBM: Proposals for improvement from GIZ Moldova