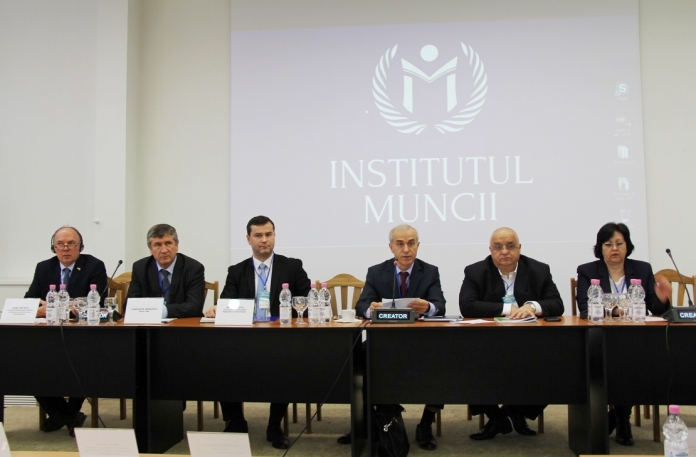 During 19-20 November 2015, Chisinau hosted the fifth edition of the National Symposium ‘Development and efficient operation of water supply and sanitation systems ‘ (DEESAC 2015). The event was organized by the Association ‘Moldova Apa-Canal’ (AMAC), with the support of German Development Cooperation through GIZ) and the support of the Ministry of Regional Development and Construction (MRDC) and the Ministry of Environment (MoE).

During two days of work there were made 15 presentations and communications, which had as theme reforming water supply and sanitation (WSS) in Moldova, regionalization of WSS services, creation and operation of regional operators, attraction and capitalization of foreign investment in the field and exchange of experience and practices in this area with other countries (Romania and Bulgaria).

Constantin Becciev, director of ‘Apa-Canal Chisinau’ and the moderator of the event mentioned about the achievements and challenges faced by  WSS sector in Moldova and priorities of the institution he leads in this area, noting that ‘water supply and sewerage is one of the priorities at national and local level, because this sector determines the consumers’ health. The purpose of today’s event is pointing out the current problems faced by WSS sector and determining paths for solving them’.

Anatol Usatîi, Deputy Minister of Regional Development and Construction said that providing the population with drinking water is one of the common priorities of the Ministry of Regional Development and Construction and the Ministry of Environment. ‘ The policy for ensuring with water and sanitation is  feasible and long-term and the obtaining of relevant results is due to continuity and consistency of the measures taken by all stakeholders in this process. Thus, during the last two years, together with the Ministry of Environment and development partners, MRDC conducted an extensive process of regional sector programming, which involved assessing the situation in the field and assertion of strategic scenarios for the development of WSS sector’, stressed Deputy Minister Anatol Usatîi. He also said that such events are very welcome and effective because ‘their mission is to extend and enhance cooperation between stakeholders in WSS sector’.

Dietrich Hahn, GIZ  International Senior Advisor on Local Public Services  noted that each institution and body has its primary role in supplying the Moldovan population with water and sanitation, and for the results to appear very soon it is needed  ‘joint efforts at local and national level in coordination of this process, prioritization in terms of investment, capacity development of operators in the field and probably one of the most important elements is that people are informed and aware that a quality WSS service costs and it must be paid’.

The fifth edition of the National Symposium ‘Development and efficient operation of water supply and sanitation systems’ – DEESAC 2015 was attended by about 200 participants, among them representatives of the Moldovan Government, city halls and local councils from over 50 urban and rural areas of the country, managers of ‘Apa-Canal’ enterprises in the country, delegates of Romanian and Bulgarian Water Association, and international development agencies. According to organizers, the mission of this event is to boost development processes and efficient operation of communal systems of water supply and sanitation in Moldova.

We would like to recall that the German Development Cooperation through GIZ , via the project ‘Modernization of local public services in the Republic of Moldova’ is implementing three pilot projects in water supply and sanitation in Riscani, Leova and Cahul rayons with a total budget of approximately EUR 5 million.