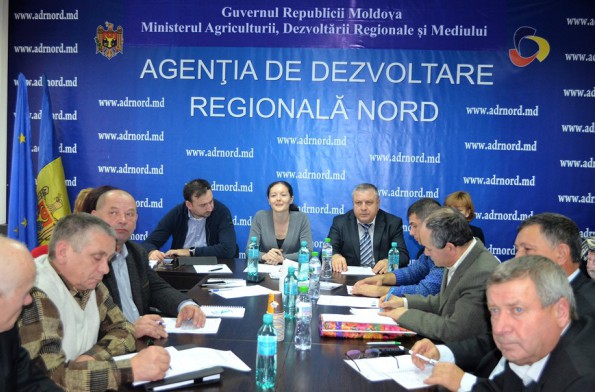 Members of Regional Sector Commission in the field of Solid Waste Management (SWM RSC) from the Development Region North, created with the support of the German Development Cooperation through GIZ under the ‘Modernisation of Local Public Services in the Republic of Moldova’ (MLPS) project, met on 3 November in a first meeting at RDA North. The event was, also, attended by representatives from the Ministry of Agriculture, Regional Development and Environment (MARDE), European Investment Bank, GIZ and RDA North.

Members of SWM RSC elected Victor Cimpoieș as co-chair of the Commission. He is the executive director of the Public Association ‘Cutezatorul’ from Falesti, known for his experience in the given field. The co-chair from MARDE is Silvia Nicolaescu, deputy head of Prevention of pollution and waste management Division, approved by the Decision no. 2 from 27 September 2017 of the North Regional Development Council (RDC).

The interim director of North RDA, Constantin Bandiu, expressed the belief that the work of the new Commission will be characterised by participative approach in decision making with an impact for the region, which will contribute to strengthening the inter-municipal cooperation in the field of solid waste management. In his turn, the national advisor GIZ Denis Parea reconfirmed GIZ openness in providing the Commission with necessary support, so it’s fulfilling its mission efficiently.

Members of SWM RSC got acquainted with the internal working rules of the Commission, as well as, its objectives. Further, they discussed the current situation in the two waste management zones (no. 7 and no. 8) from the North Development Region, the experience and initiatives of regionalising the waste management services, as well as, projects in the SWM sector, which are under implementation in the North Development Region. In this context, the head of the Strategic Planning and Programming Section in North RDA, Inga Cojocaru, informed the members of the Commission on the SWM projects included in the Single Programming Document (SPD) and in the North Regional Operational Plan (ROP). The members of the Commission, also, were presented with the national policy and existing framework in the SWM sector. Virginia Galatonov, MARDE representative provided the information in this respect.

SWM RSC was established by North RDC Decision no. 3 from 29 June 2017. It was back then, that the internal working rules of the created structured were approved by North RDC. The functionality of the Commission will be ensured by North RDA with MLPS support, implemented by GIZ with financial support of the German Ministry of Economic Cooperation and Development (BMZ), the Romanian Government, the Swedish Government, European Union and the Swiss Agency for Development and Cooperation (SDC).

As part of its work, SWM RSC will debate draft decisions elaborating recommendations on them, which will be further, presented at North RDC meetings. The Commission will have the task to examine and approve regional development priorities in the SWM sector, promote regional projects among donors and investors, examine with specialised independent expert support the project pipeline, various surveys, analysis and recommendations for the formation of a regional vision on the development of the given sector.