What is Regional Development…

Regional Development is an integral part of the European Union’s Cohesion Policy, which provides Member States and regions with coordinated tools to address complex challenges in a 7-year financial cycle specific to the European Commission, which, under other conditions, would fully materialise in 15-20 years. Regional policy is an expression of solidarity, as it focuses on supporting less developed regions. This policy also addresses all regions and cities, encouraging job creation, business competitiveness, economic growth, sustainable development, all of which lead to improving quality of life. Regional policy is a set of measures, actions and tools that support the development of regions. The European Council defined the region as a “territory which forms, from a geographical point of view, a net unit, or a similar set of territories in which there is continuity, where the population possesses certain common elements and wishes to retain its specificity thus produced and develop it in order to stimulate cultural, social and economic progress” [Anca Ghinea,“The Republic of Moldova closer to the European Union through regional development. The example of Romania”]. 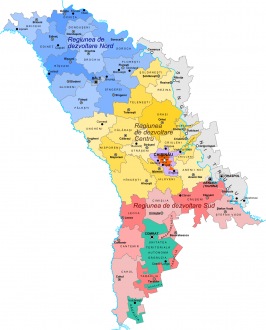 In the initial approach, the aim of regional development policy was to reduce disparities and strengthen economic and social cohesion between European countries. Since 2014, the paradigm of this approach has changed, in that the regions seek to specialise in the sectors offering the greatest potential for growth and competitiveness, in which the given region already has a competitive advantage or can develop one.

The National Strategy for Regional Development (NSRD) is the main regional development planning document reflecting the priorities, mechanisms and priority measures. During 2009-2020, there were several implementation cycles for this strategy at both national and regional level. With the change of the Regional Development Paradigm in the Republic of Moldova, the elaboration of a new NSRD for 2021-2027 has begun. Central and local public authorities, as well as representatives of civil society and international organisations participate in various stages of Strategy development.

Ministry of Agriculture, Regional Development and Environment (MARDE) is the central specialised authority of the public administration to elaborate and promote the state policy in the field of regional development. MARDE’s mission is to analyse the situation and problems in the concerned field, develop effective public policies and monitor the quality of these policies and normative acts, as well as propose justified interventions that will provide effective solutions in the field of regional development.

What are the funding mechanisms…

The Fund can attract any other financial sources from the public and private sectors at local, regional, national and international levels, including those provided via European Union assistance programmes and those of other development partners.

What is MLPS project support…