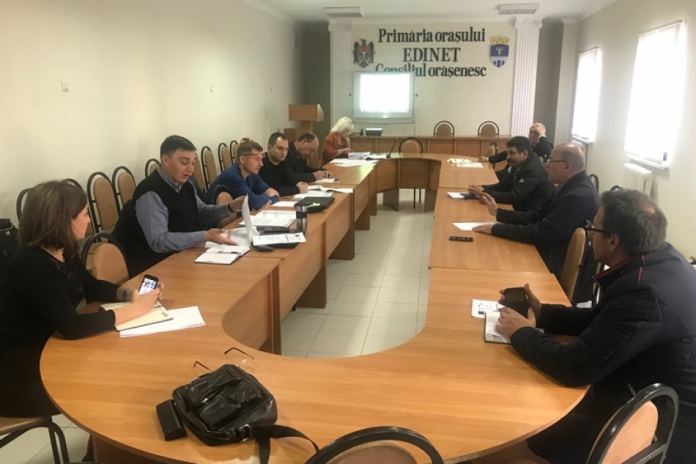 Members of the Local Steering Committee (LSC) of the project ‘Improvement of water supply and sanitation services in Edinet municipality’ met on Friday, 26 October 2018 in a third meeting organised at the townhall of Edinet municipality. At the meeting, the project monitoring report was presented for July-September period of this year and the activities from the implementation plan for October-December.

Also, the LSC members discussed ways of collecting the contribution for connection/re-connection to rehabilitated water supply networks as a result of project implementation and set up actions to be taken in this respect.

Additionally, on Friday, 26 October, in Balti, the design service contract for the development of construction documentation for improvement of water supply and sanitation services in Edinet municipality project was signed.

As a result of project implementation, the water supply networks in Edinet municipality will be extended by 4.5 km and 22.9 km of networks will be rehabilitated. Over 3.300 inhabitants of Edinet municipality will be connected to the water supply system.  The estimated value of the project is EUR 2.85 million provided by the European Union and EUR 774.000 – contribution of beneficiaries.

We point out, that the established LSC under the project in Edinet serves as a platform to ensure a better cooperation between the main stakeholders in implementation of projects, in particular and of regional development policy, in general.

© 2021 Modernization of Local Public Services in the Republic of Moldova. All rights reserved
Crafted by BRAND.MD

Warning: strpos() expects parameter 1 to be string, array given in /var/www/gizserloc/data/www/serviciilocale.md/wp-content/plugins/wp-optimize/minify/class-wp-optimize-minify-fonts.php on line 203